Annual Holiday Art Sale at my house this weekend. Hope to see some of you locals! 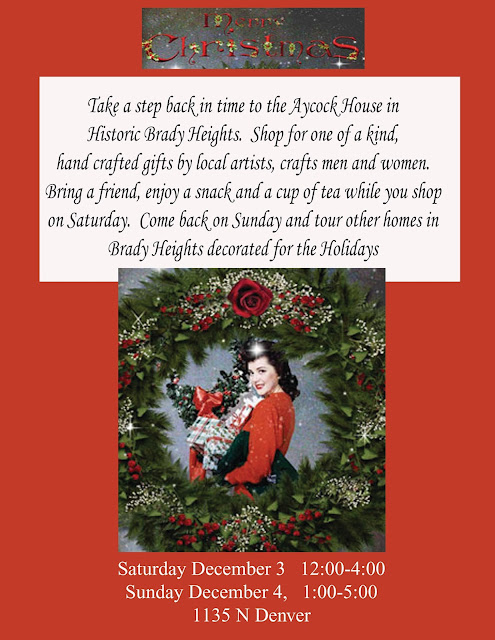 Posted by Margaret Aycock at 6:19 AM No comments:

It's that time again.... Time to take a walk in the woods without having to worry about getting chiggers or ticks and look for something sweet.  They are as much fun to paint as they are to eat.  If they are squishy and ugly, those are the ones you want to eat.  A lot of times you will find them on the ground when they reach that point.    You have to be quick though because the deer love them as much as you do.  ;-)

These are on auction in my ebay gallery today.  Click here to visit my Gallery
Posted by Margaret Aycock at 7:15 AM No comments:

This time last year Scott and I were in a workshop over in Coyle, OK where we were learning about all the different kinds of wild foods that were available to us in our state.  I brought my camera along so I wouldn't forget how to recognize different plants.  While there I snapped a pic or two of other participants.  This is a painting done from one of those photos.  Just a side note, our facilitator was Jackie Dill, a Native American woman who shared with us her favorite gathering places and taught us how to identify and cook foraged food.  At this writing her stone home is nearly destroyed by recent waste water injection caused earthquakes that have rattled my own home which is a 2 1/2 hour drive from the epicenter.

To visit this piece in my Ebay Auction, Click Here 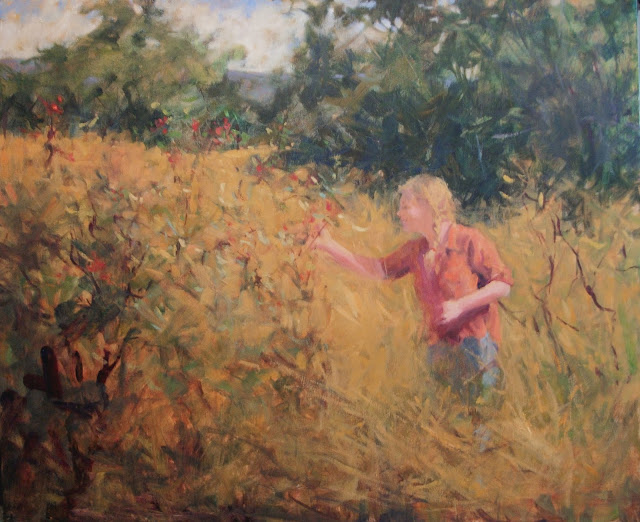 Posted by Margaret Aycock at 7:01 AM No comments:

I did this painting, which is kind of a departure for me, for a show that Scott and I did last year at right about this time.  The show was a back and forth between painting and poems.

Here's the painting that is on auction this week on my ebay gallery site, Click here to visit. 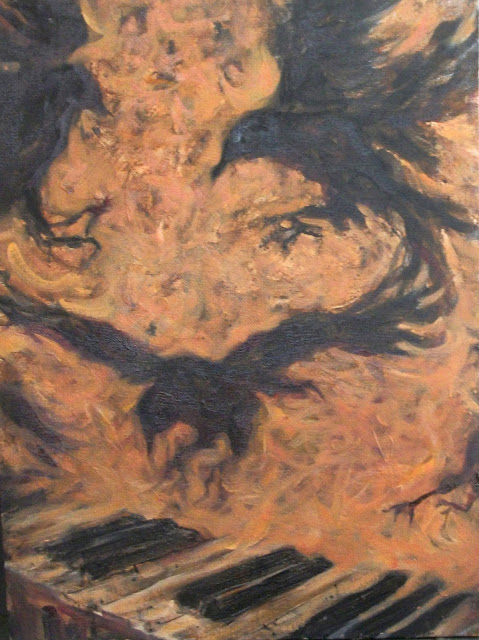 Here is the corresponding poem written by Scott Aycock

Cecil keeps our yard trim as a sailor’s beard-
not a blade of grass out of place.
With a surveyor’s eye he places poles along
the hedge row,
making Grandma’s English Boxwoods
level as poured cement,
stretching the length of the drive.

He starts early and works through, into the
heat of the day.
I am just a boy.
Cecil comes to back door, hat in hand, like a child asking a favor of a man.
“Mr. Jo Eddie’s grandson, you ‘spose I could have me some ‘freshment?”
I go under sink where grandma keeps the
drink, pour comfort from a bottle.
I place a capful in a glass, fill the rest with water.
It turns the color of rosin.

That’ll do, Mr. Jo Eddie’s grandson, don’t need no ice.
He tips his head, tosses the drink, and wipes
his mouth.
It is a litany of motion.

Five drinks into the day, his tools put away,
Cecil comes to the door-  a final drink to stay
the blues away.

I being home alone,
Cecil points with fingered bone
towards ivories lined up in a row.
“Mr. Jo Eddie’s grandson, I can make that
coffin sing.
Some folks they scared a dyin’, but they ain’t got that rhythm thang.”

Bowed over the keys, eyes closed,
Cecil is there in some sepia-toned place.

It seems with every note, with every chord,
Cecil spills more of himself between the keys,
as though the music is drinking him one note
at a time.

With an ear bent to the ivories, listening for the sound of suffering as it leaves his fingertips;
Cecil’s hand begins to jitter, and juke, and then to jive,
into some boogie-woogie slide.

His huge black hands, like crows,
flap the width of the piano,
as  Cecil tosses back his head, enraptured.

I am just a boy held in time.
Watching.

As Cecil’s shoulders sway in time to the beat,
mouth open, he eats.


A truer sound.
Posted by Margaret Aycock at 3:27 PM No comments:

Garlic from my garden, Blue Bowls and Cutting Board

This was our latest class project.  I had a bunch of new students and thought we might try something that didn't look too scary.  I really liked the way it turned out.

I had a nice harvest of garlic this year and it is one thing that you can leave out for an extended time with out it fading away or shrinking.  I just put this on auction on my ebay gallery.  To visit this piece in Ebay and wander through the gallery, click here 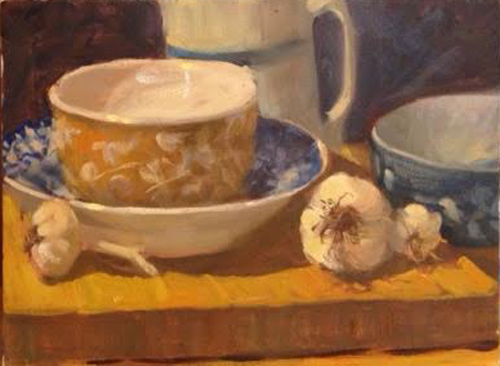 Posted by Margaret Aycock at 10:19 AM No comments: 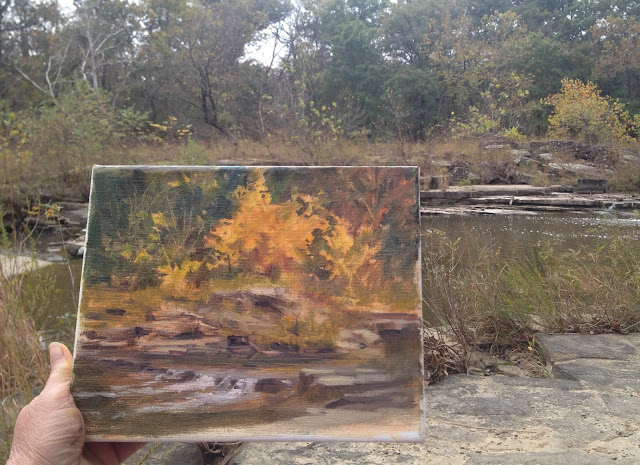 There is nothing I like better than sitting in nature w a canvas and paint.  I especially like being near running water.  As luck would have it it was a very cloudy day as we visited Osage Hills State Park this weekend where I did this little sketch on the edge of this sweet little creek.
Here it is on my ebay auction this week... Click Here for Auction
Posted by Margaret Aycock at 3:00 PM No comments: