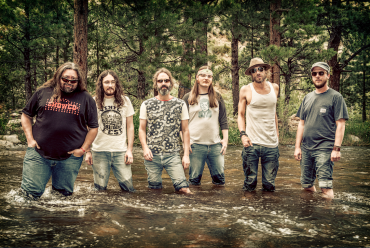 Photo Credit: Jay Blakesburg
Hard Working Americans brings its soulful, gritty, Americana-jam-band brand of rock and roll back to Fayetteville, Ark.’s George’s Majestic Aug.18. Singer songwriter Aaron Lee Tasjan opens the show. The Todd Snider-fronted HWA is touring in support of its latest release, Rest in Chaos, which features 12 original tunes and a Guy Clark cover.
As a solo artist, Snider is known for his sarcastic wit and well-crafted, alt-country folk songs. With HWA, he adds a large dose of psychedelic with the help of some seriously talented players, each with his own jammy pedigree. Bassist Dave Schools (Widespread Panic), guitarist Neal Casal (Chris Robinson Brotherhood), drummer Duane Trucks (Col. Bruce Hampton’s School of Music), keyboardist Chad Staehly (Great American Taxi) and Tulsa, Okla.’s own Jesse Aycock on guitar and lap steel round out the band.
A talented songwriter in his own right, Aycock is a fixture on Tulsa’s music scene. In addition to his own recordings, Jesse’s playing has been featured on albums by fellow Okies like Samantha Crain, John Moreland, and Paul Benjaman. He’s also spent time on the road with Americana duo The Secret Sisters.
Aycock’s introduction to HWA came through guitarist Neal Casal. The two have known each other for years. Casal contributed to Aycock’s 2014 Horton Record’s release Flowers & Wounds.
Oklahoma is still home base for Aycock, but he spends a significant amount of time in Music City.
“I’m still calling Tulsa home, but I end up spending quite a bit of time in Nashville,” he said. “There’s a really amazing group of musicians there that are doing a lot of cool things in the community.”
A play in neighboring Fayetteville is always a homecoming of sorts.
“There’s always a few familiar faces at Georges - some from Fayetteville and usually a handful of folks that trek over from Tulsa,” Aycock said.
Aycock is a big fan of this Dickson Street venue.
“I always have a great time at George’s, whether playing or attending shows. George’s has always been one of my personal favorite venues,” Aycock commented. “A lot of the staff has been there for years and are wonderful to work with. Both rooms sound amazing and are the perfect size. I’ve always been a fan of medium-sized venues because it puts the band closer to the listeners. My buddy Arlie has done sound there off and on since I first started playing George’s, and he does an excellent job.”
A veteran of the recording studio, Aycock particularly enjoyed working on HWA’s latest record.
“The recording process for Rest in Chaos was unlike any other record I’ve ever been involved with,” he explained. “We started tracking right after the last show of our first run in Chicago. It was right in the middle of winter and so cold that parts of the lake were frozen over. Being such a new band and still riding the high from an incredible first run combined with the bitter cold made for a perfect storm. Todd had some poems and was writing many of them on the spot. There were a lot of ideas being bounced around until one would get caught in the musical vortex. The songs just kind of started constructing themselves – true inspired magic. The amount of material we were able to come up with in a week was pretty unreal.”
Aycock enjoys life on the road with his HWA bandmates.
“Getting to play music together every night isn’t half bad,” he joked. “I continue to become a better musician and learn so much from every show. There’s also a ton of freedom in this band, which is important on many levels. Hanging out on the bus listening to records and hitting the local record shops in every town we’re in is great fun. Everyone in this band has such a deep knowledge of music, and I’ve been turned on to a lot of great records because of it.”

Posted by Margaret Aycock at 9:30 AM