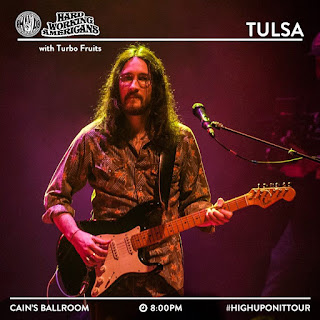 Posted: Wednesday, August 26, 2015 12:27 pm | Updated: 12:50 am, Thu Aug 27, 2015.
By JERRY WOFFORD World Scene Writer | 3 comments
The renowned musicians in Hard Working Americans had already cut a record when Tulsa-native Jesse Aycock got a call from the band. Aycock was on tour with The Secret Sisters already, but the group wanted him to come along on the road with it.
“Neal (Casal) called me up and asked me what I was up to and if I was free,” Aycock said. “He said, ‘Hey man, I just got done recording this record and we need a second guitarist, and you were the first person who came to mind. I think the plan right now is to do a handful of shows. I don’t really know where this is going quite yet, but it should be fun.’ The songs are really cool. Of course I was like, ‘Yeah, I’d love to do that.’”
That’s how Aycock became a Hard Working American.
The rock supergroup, made up of Todd Snider, Dave Schools from Widespread Panic, Casal of the Chris Robinson Brotherhood, Chad Staehly of Great American Taxi and Duane Trucks who is the younger brother of Derek Trucks. Their first album was released in January 2014, a project done by a group of friends while they worked on their other steady gigs.
Aycock said while they weren’t sure where it was going — especially when he was brought in to be a road musician on rhythm and lapsteel guitar — the group dynamic was strong and close, a natural relationship they all enjoyed. The road grew longer, and they have now recorded a new album, this time with Aycock a full-fledged member.
And Thursday, the road comes to Tulsa with the band’s first stop at Cain’s Ballroom, a homecoming for Aycock. The show is set for 8 p.m. Thursday.
Before Aycock came on board, he said the group basically created Hard Working Americans as a fun side project, not necessarily something to run with.
“They basically just put together a group to record a record,” Aycock said. “I think initially it was all just everybody had other projects that were taking up most of their time. I think this was just a fun project and I don’t think anyone had any expectations of taking it.”
Their scope expanded after recording that self-titled album. When they realized they needed another guitarist for the road, Aycock was their first call.
Aycock has recorded and toured with several bands while also working on his solo albums. Aside from Hard Working Americans and The Secret Sisters, Aycock has worked extensively with the Paul Benjaman Band. His solo album, “Flowers & Wounds,” was released the same month as the Hard Working Americans album.
He was on the road when he got the call about Hard Working Americans and in a week had to learn the songs and make it to Colorado to hit the road.
“It wasn’t decided right away that I would be a member of the band other than I would be just a touring musician,” Aycock said. “It wasn’t decided I would be in on any other recordings, it was just strictly touring I think initially, which makes total sense because other than Neal, none of the other guys knew me. Once I got in there and started playing, everyone meshed really well, and everyone was really open to me.”
After a week of rehearsing that went well as the band settled in on their songs, Aycock said several members of the band came by independently to tell him he was part of the group now. And what a great group to be a part of, he said.
“It doesn’t always work when you get a bunch of musicians who haven’t played together in a room. It doesn’t always work personality wise, musically. But with this group of people, it was just a perfect dynamic,” Aycock said. “To me it was such a refreshing joy to be part of. Everyone was supportive and open to everyone’s idea, but yet it was still enough structure to get things done.”
After a first run on the road, the band hit the studio again for another recording session. Aycock said those sessions were great because of the group dynamic and the high from successful shows on the tour. That album is due out in early 2016. And last year, the group released a live album and documentary on its first collaboration, “The First Waltz.”
The Hard Working Americans are living up to its name.
“Whenever projects are given time away, when you step away from a project for a while, you come back into something like this with a fresh energy,” Aycock said. “Everyone has new perspectives. It’s always fun because it’s different every time.”
Jerry Wofford 918-581-8346
jerry.wofford@tulsaworld.com
Posted by Margaret Aycock at 3:14 PM